skip to main | skip to sidebar

Finding out about New Zealand Comics!

There will be no New Zealand Comics weekend in Wellington this year. But there is still Armageddon Wellington Expo April 9th & 10th 2011!

Look out for the NZCC stand where you will be able to buy comics! Exhibition booth 48, map here. 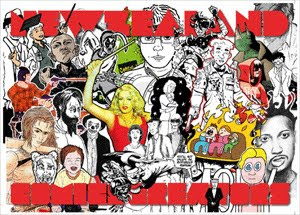 Support New Zealand Comics!
Till next time
Draw
Drawingsilence.com
Posted by Draw at 2:43 pm No comments:

Congratulations to the winners of the 2010 Black River Digital Eric Awards!

Best Webcomic:
TIE
Drawing Silence by Draw
and
How to Understand Everything and Not Hate Yourself by Meredith Van Halen

It ain't over yet!

The glitz and glam and celebrity guests of the Erics may be over, but Comics Weekend is still rockin' on!

The doors are open today from 10am to 5pm. The NZCC stall is still selling NZ comics including many of last night's award winning comics.

There are two talks scheduled for this afternoon starting at 2pm. First up is Travis Lealand-Maplesden on the translation of bande dessinée, followed by Dick Whyte on conceptual comics and a discussion with Draw, creator of the Eric award winning Web comic Drawing Silence http://www.drawingsilence.com/.

Claire Harris
NZCC
Posted by Claire at 11:04 am No comments: 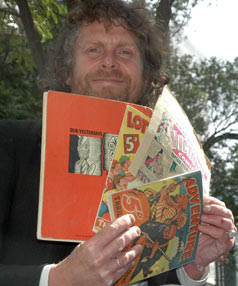 And linky goodness!
From Earth's End

Over at Dylan Horrock's site Hicksville Comics the Wellington book launch of the long awaited New Zealand Printing of Hicksville. 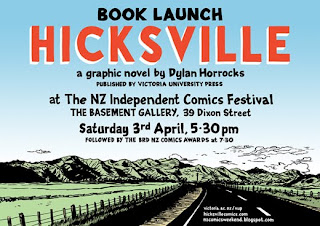 Plus a long interview with Dylan on the stuff website: Comic genius returns home
Posted by Draw at 3:53 pm

WHAT'S ON AT COMICS WEEKEND...

THE NEW ZEALAND INDEPENDENT COMICS FESTIVAL will run from the evening of Friday 2nd April to the evening of Sunday April 4th, at The Basement Gallery, 39 Dixon Street, Wellington.

The events we've scheduled so far are as follows:

Which really is an opening FOR...
Two Exhibitions curated by Dr. Tim Bollinger, running 2nd -4th April.
Two exhibitions, NZ Comix in 70’s and The Work of H.W. Bennett, will be launched on Friday night and on display throughout the weekend. Dr. Tim Bollinger is a Comics Historian of some repute who has previously curated several comics focused exhibitions. He is a regular contributor to White Fungus magazine

3rd April, 5:30pm: Wellington Launch of Victoria University Press edition of Hicksville, by Dylan Horrocks
Hicksville is arguably New Zealand’s best know graphic novel, and the VUP edition is the first edition of the novel to be published in New Zealand. It has been translated into several languages, and its author, Dylan Horrocks, has been a guest of several comics and literary events, including the Les Belles Etrangères festival in Paris.

Events confirmed but yet to be scheduled include: bande-dessinee with Travis Lealand-Mapelsden, Abstract comics with Dick Whyte, and engaging kids comics activities with G.C.R.

The NZCC (New Zealand Comics Creators) will be hosting sales at both Comics Weekend and Wellington Armageddon.

We will have close to our full range on offer at both venues, including the new edition of Dylan Horrocks' 'Hicksville', 'The Imposter' by Lee-Yan Marquez and a (near) new issue of my own 'Chicks With Knives'.

In addition, selected copies of Bryce Galloway's zine 'Incredibly Hot Sex With Hideous People' and some international comics TPBs will be available at Comics Weekend only.

If you have any comics or zines that you'd like to offer for sale at Comics Weekend please email
nzcomicsweekend (at) gmail.com.

Claire Harris
NZCC
Posted by Claire at 2:17 pm No comments: The weekend is organised by a loose collective of comics enthusiasts and artists. While not representative of the entire NZ comics scene, we're offering an open celebration and get-together for everyone interested in NZ comics.

It's a fairly relaxed structure and the weekend's events are under constant development - this blog will have updates on any sweet programme additions and changes.

If you have any questions or want to be involved, e-mail nzcomicsweekend@gmail.com and we'll put you in touch with someone who can help.

See you all there...